Yep. It’s true. Writers may, unfortunately, use a dash when they are in a rush, and don’t have, or don’t take, the time to complete a thought. In fact, one dictionary definition for “dash” is “move with haste; rush….” While the writer may suppose that the reader will complete his or her thought, or will “know what I mean,” this supposition can be dangerous territory.

The reader may very well complete the writer’s thought – with thoughts of his or her own – and totally negate whatever point the writer had hoped to make. Or maybe, and probably more likely, skip along, giving that incomplete or unsupported nascent idea no recognition or thought at all.

The dash is an interruption of your sentence’s smooth flow. That’s why it’s often used for emphasis – because its interruption causes your reader to stop and think, even for that split millisecond. But use dashes economically; too many interruptions can be confusing, and defeat your purpose for using them.

The dash can work in two areas: clarity, and style. As you saw above, not all sources agree on what the dash should look like, and not all keyboards are the same. Writing is a visual art. I prefer the space-hyphen-space (the final one above), but you may choose whichever “looks right” to you. Just remember (1) to be consistent; and (2) to avoid over-use in your writing – more like pepper than salt!

Now: As for the hyphen. Here’s where we have some definite grammar rules, along with some indefinite authoritative differences of opinion.

The dash and the hyphen each have a different job. The dash is often used to “split” or separate, or to emphasize large pieces of a sentence. The hyphen is more of a connector, or disconnector of individual words, or word parts.

Most students learn that when a word must be broken at the end of a line, a hyphen goes at the end of the nearest syllable, or “word bit.” We probably learned that some words are always hyphenated, some never, and with some, it depends. “Look it up,” we may have been told. Here are a few guidelines to make it a bit easier, and if you’re not sure… Well, you know: “Look it up!”

You will want to use hyphens:

• When two words come before the word they are describing, and one or the other is not a stand-alone word, e.g.,

My red-haired sister and I went swimming.

• But generally not when those words come after, e.g.,

My sister has red hair.

This opportunity provides your last chance.

• And not when each of the two words is a stand-alone word, e.g.

Augusta was a cranky old lady.

He is a pleasant young man.

• For some terms describing members of a family, e.g.,

• When the dictionary always spells it with a hyphen

You must use a hyphen:

• When you add a beginning or an ending to a word that is capitalized, e.g.,

All in the family:

• Use hyphens for ex-spouse; sister-in-law; and great-uncle.

• Do not use a hyphen for stepdaughter; half sister; or grandfather

These are the most common hyphenated and non-hyphenated words. But then there are those other, less-common words, the exceptions, and the surprises, where you cross your fingers, open the dictionary, and hope you get it right!

Bring Gail to your workplace for an onsite workshop, coaching, or consulting. Or to work with your team to complete a writing project.

It’s not always – in fact frequently not at all – what you say, but how you say it.

I got thinking about this the other day, and how much difference it makes in the way you may feel about the people you could buy products or services from. And more to the point, how our prospects, customers, and clients might feel about us, as people they could buy from, or hire. 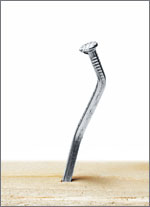 The dangerous duo here are the words “Can’t,” and “Can.”

It’s a matter of tone – the relationship the writer sets up with the reader. Does it seem to you that the word “Can’t,” in this example, sets up a confrontational tone? Do you almost expect the words “you dummy” to either precede “Can’t,” or maybe end the sentence? If this sentence were addressed to you, would you feel challenged, like you had to defend yourself and explain why you could, or could not, “tell”?

In contrast, how do you feel about “Can”? Does “Can” have more of a teamwork feel to it? Which of the two sentences would make you feel more a part of the team working together to find the solution?

Just as a side note: There are also punctuation issues common to both of these sentences that will make a big difference in what your sentence says. If you said

Can you tell whether the nail’s defect was caused by improper handling during the manufacturing process?

In this case, “nail’s” would mean one nail with one defect. But if you said

Can you tell whether the nails’ defect was caused by improper handling during the manufacturing process?

In this case, “nails’” would mean more than one nail – millions, even, with the same, one defect. Serious stuff! But even more serious, what if you said

Can you tell whether the nails’ defects were caused by improper handling during the manufacturing process?

In this case, we have multiple nails with multiple defects. What a difference that little apostrophe can make.

We appreciate your recommending a Gail Tycer business writing workshop for your workplace, or a shorter presentation for an upcoming professional meeting.

The style you use to show the titles of books, magazines, plays, software, and so on has changed over the years as better technology has emerged. Even so, not all authorities agree on what this sort of “major” title should look like.

Let’s take a time out to take a quick look at the issue of style:

The Associated Press Stylebook and Briefing on Media Law is arguably the premier style guide for newspapers and publications written for the average adult reader. Also perhaps the most widely used business writing style guide.

In addition, many universities, colleges, and schools devise their own style guides, addressing such common questions as “where does the comma go,”  “what should a title look like,” and “how many spaces should there be between sentences.” Similarly, a great many public- and private-sector organizations also produce their own style guides, similarly advising their writers how to use punctuation, or capitalize words.

Thus, we have two major styles: formal, or academic; and informal, or journalistic. Many style guides are available either in paper versions, or online, frequently on a subscription basis.

So, is there a difference between “correct” grammar and usage and style?

Absolutely. And the confusion and resulting arguments – online, as well as around the water cooler – can gobble up on-the-job hours, as well as playing fast and loose with the spirit of cooperation and respect every organization needs to be most productive.

The solution: Standardize on the style guide to be used in your office, or in your organization, and have everyone use the same guidelines.

Many organizations have a style guide that no one knows about. So find out if your organization has its own style guide.  If there is one, everyone needs to use that one!

But what if your organization truly does not have a standard style guide? Then you may use the style that seems to you most effective in making your point clearly – assuming, of course, that you are (1) using that style bit consistently, and are (2) also following the appropriate grammar rules.

Oh yes, back to titles:

The AP Stylebook says to capitalize the main words, including prepositions and conjunctions if they contain four or more letters; and to capitalize articles or short words (fewer than four letters) if it is the first or the last word in the title.

Then put quotation marks around the title, with the exception of the Bible, and reference materials.

MLA says capitalize the first, last, and all principal words in the title, including both words of a hyphenated word.

For titles of sub-sets of the major work, e.g., chapters of the book; essays, stories, or poems published as a part of the larger work; magazine or journal articles; pages of a website; TV broadcast segments – and so on, use quotation marks.

So who is right? As a practical matter, do what your boss says! Just (1) do it consistently; and (2) use the appropriate grammar rules, and you’ll be fine.

If you find these tips helpful, why not bring Gail to your workplace for an onsite workshop, coaching, or consulting. Or to work with you to complete a project.  To learn more

Now that you have a subject for your blog, and some ideas for posts, what comes next? Start typing! But it’s important to take care to craft your blog posts into something readable. So before you hit the “Publish” button, take a moment to revise your writing. While the subject of your blog might be popular, your blog probably won’t get a lot of followers if your writing is hard to read or bland. END_OF_DOCUMENT_TOKEN_TO_BE_REPLACED

Writers INC is a valuable resource for writers of all ages and all genres. While intended for high school students, it contains a wealth of essential information that is relevant to business writers.

A quick look at the Writers INC table of contents:
END_OF_DOCUMENT_TOKEN_TO_BE_REPLACED

1. Start the easy way. Use your spell checker—remember, it will “OK” any word that is correctly spelled, whether or not it’s correctly used

2. Use the grammar checker. Make sure you understand what it’s trying to tell you.

3. Leave some time between inputting the material and proofreading it. Overnight is good. When possible, try to schedule proofreading when you’re fresh, and there are the fewest distractions.

END_OF_DOCUMENT_TOKEN_TO_BE_REPLACED

There’s a lot more to your word processing program than just spell checker!

For most PC and MAC versions of MS Word:

END_OF_DOCUMENT_TOKEN_TO_BE_REPLACED

National Punctuation Day, established in 2004 by journalist Jeff Rubin, is a day to recognize one of the most underappreciated and most inappropriately used aspects of language: punctuation.

In honor of National Punctuation Day, the Huffington Post created a punctuation quiz. Click here to test your knowledge.